A look at the Case-Shiller House Price Index since 2000 clearly shows the development of the devastating real estate bubble in the USA, which peaked in July 2006 at 206.52 index points. House prices doubled between 2000 - 2006, after which the bubble burst caused by massively increasing interest rates. After the expiration of government aid to stabilize the real estate market in April 2010, the negative reaction came promptly: in March 2011, after a significant interim recovery, a new low was reached after the outbreak of the crisis (double dip). In December 2011, a new low in average US real estate prices was noted and a third low of 136.64 points was reached in March 2012 (triple dip).

Since the beginning of 2013, there have been clear upward outbreaks in real estate prices on a broad front. Since its low after the real estate crisis in March 2012 (136.64 index points), real estate prices have recovered very significantly. The current S&P Case-Shiller House Price Index of the 20 metro areas shows that in January 2018 the price level almost reached the peak of the real estate boom in 2006. The COVID-19 pandemic has not yet had any impact on property price trends either. On the contrary, prices continue to rise steadily and are in an intact upward trend.The statistical data usually comes two months late and refer accordingly to the situation two months ago.

If you want to invest in U.S. real estate, the search for a suitable property is very simple: Almost all properties for sale are listed in a central database (MLS). Therefore, ask an experienced broker you trust to look for a suitable house, apartment, or vacant land.

Search for your Florida Property now!

In Southwest Florida, real estate in Cape Coral was hit especially hard after prices had literally exploded during the previous boom years. As most buyers had financed Cape Coral properties on a short-term loan basis, many homeowners experienced increasing financial difficulties as interest rates subsequently rose. While real estate prices in the U.S. have only been recovering since 2013, the turnaround in Cape Coral, Lee County, was already initiated at the beginning of 2011. 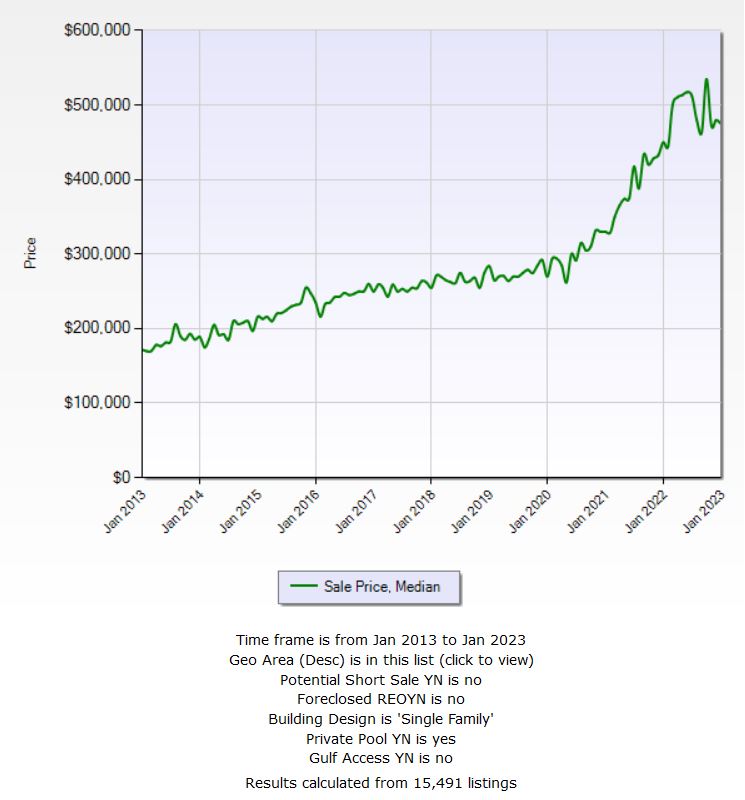 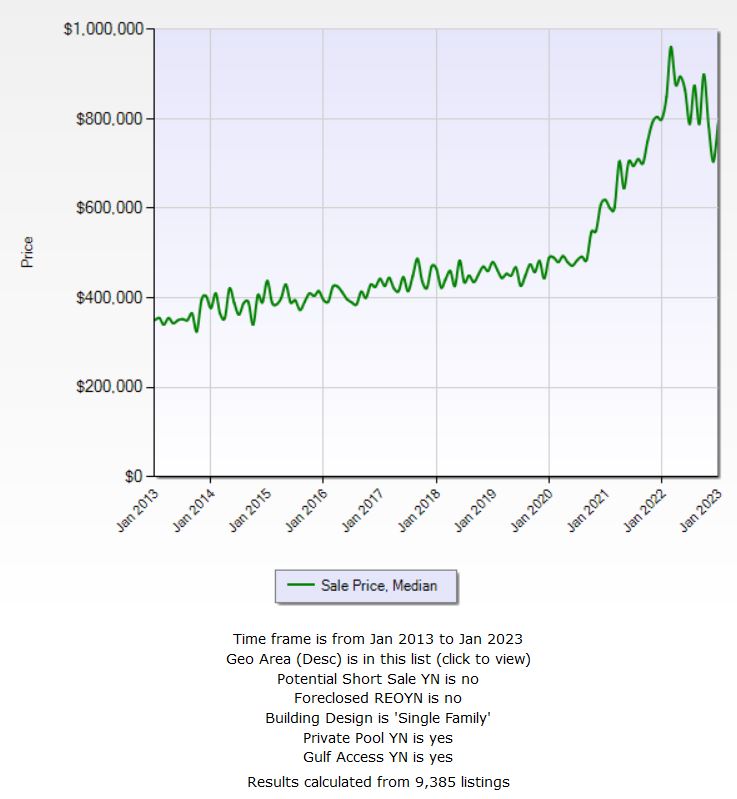 The purchase of a Cape Coral property still represents the entry into a consolidated and sustainably rising real estate market, as US buyers are returning to the market. For a successful real estate investment, a low purchase price play an important role, but above all the choice of the right location with corresponding upward potential.

Off-water Homes in Cape Coral in good locations - starting at $300,000

Existing properties without access to the Gulf of Mexico can be purchased for $261,000 (average location). 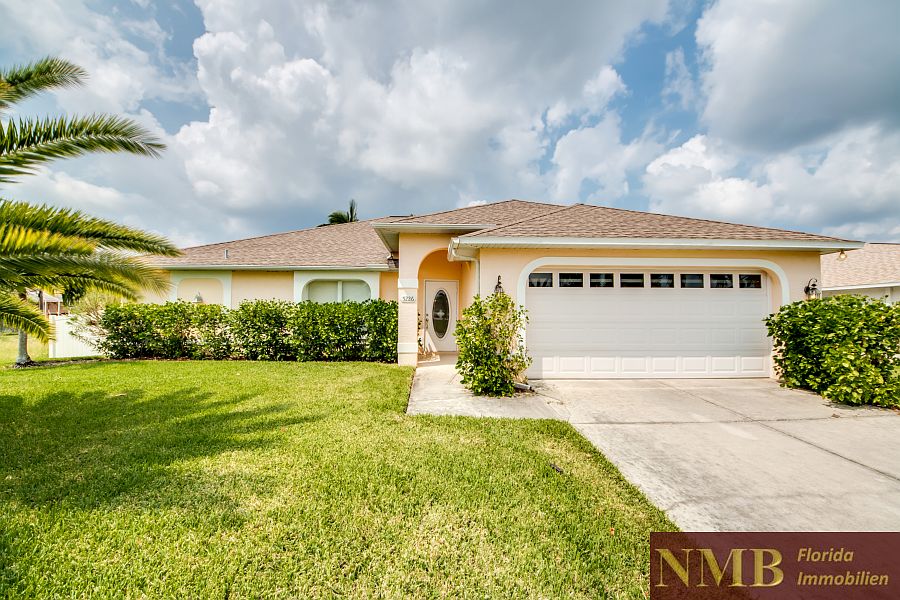 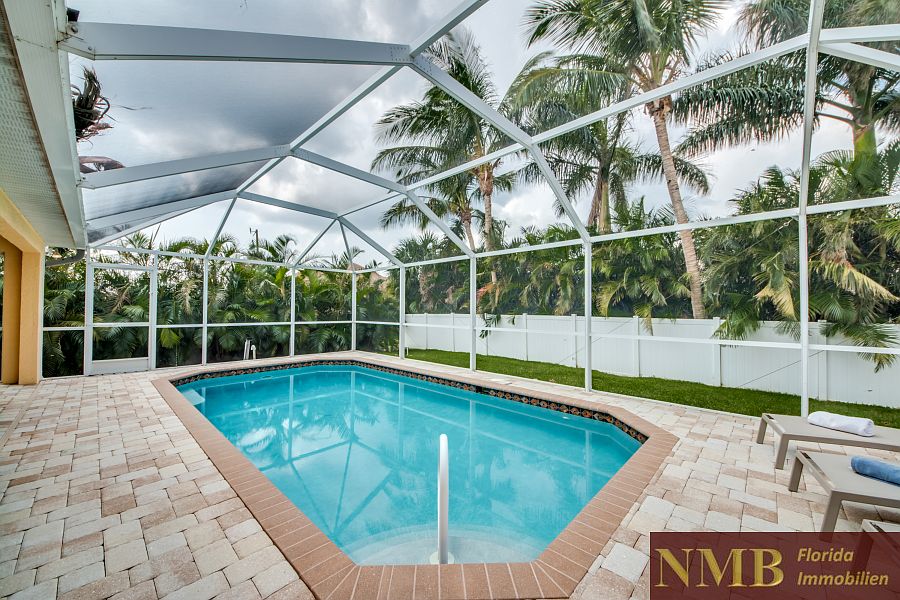 Existing properties with access to the Gulf of Mexico can be purchased for $420,000 (average location). 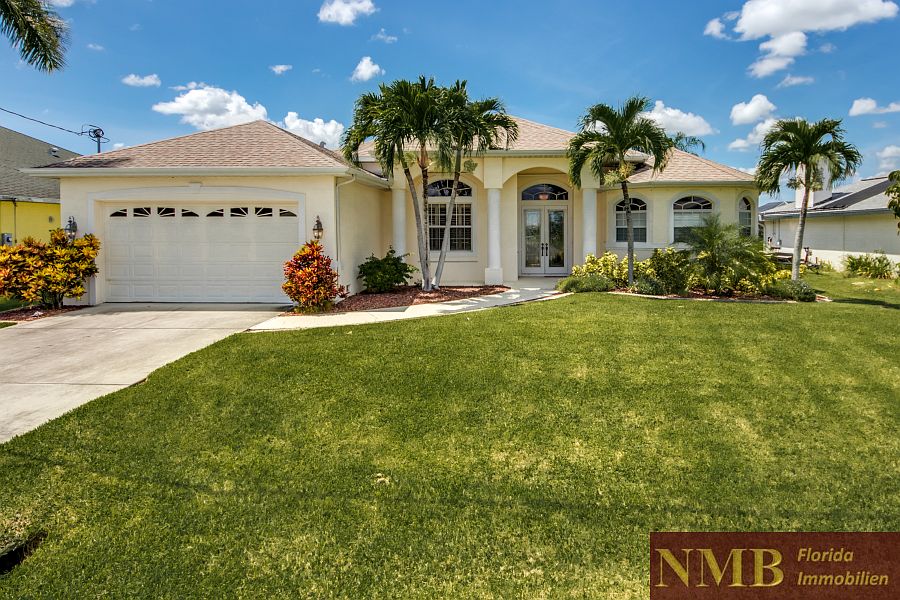 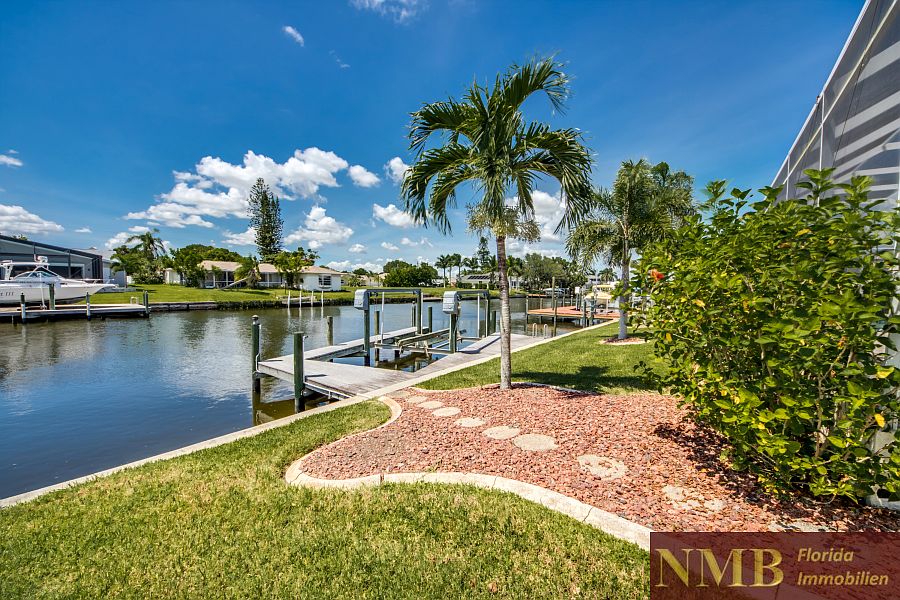 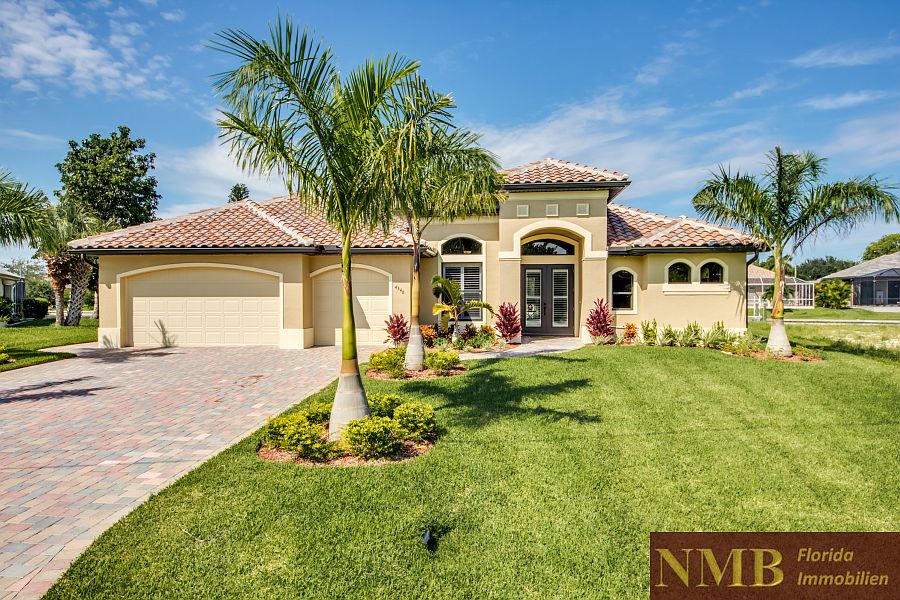 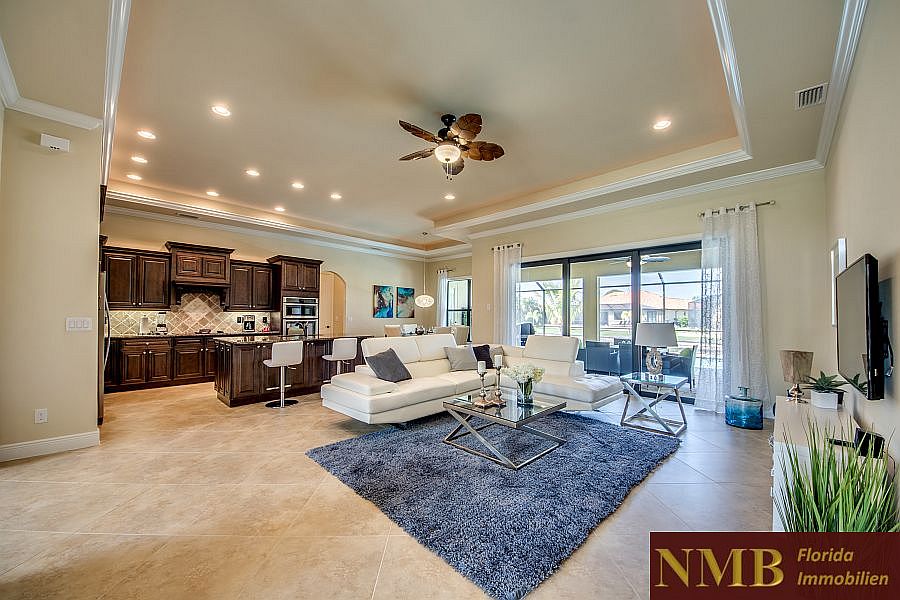 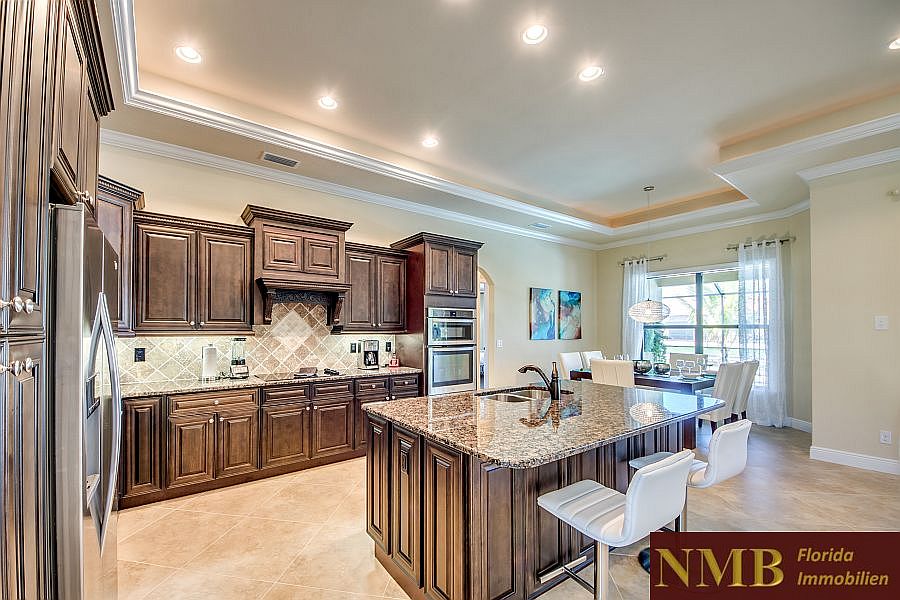 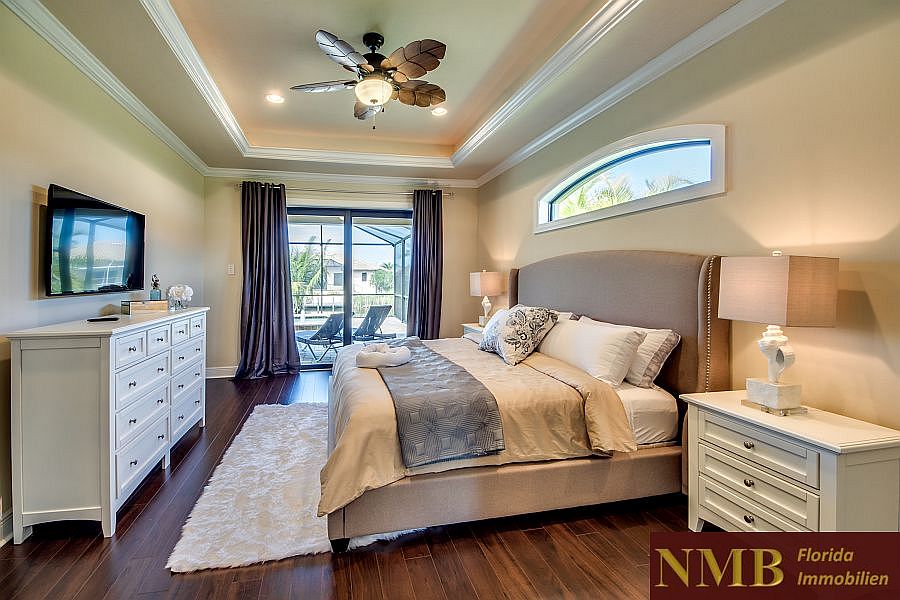 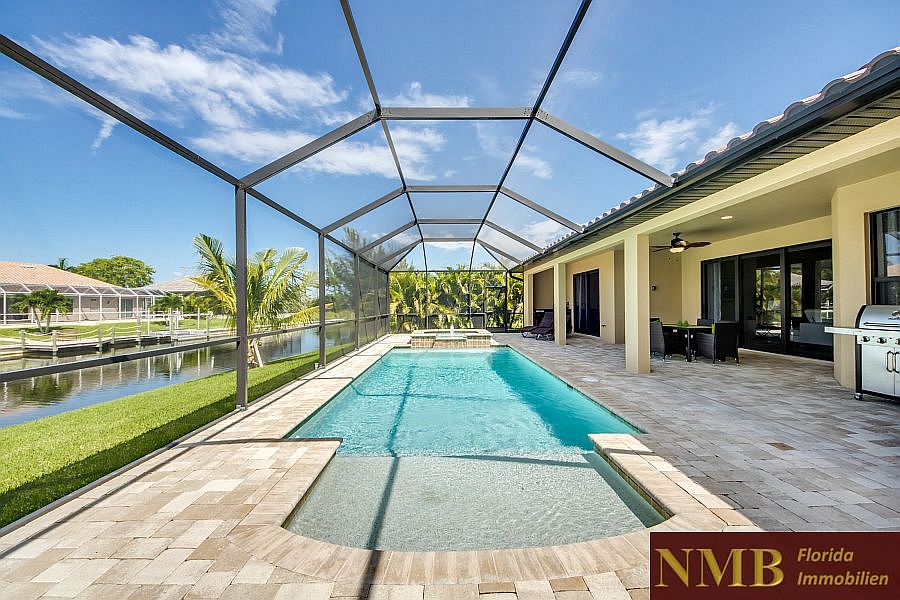 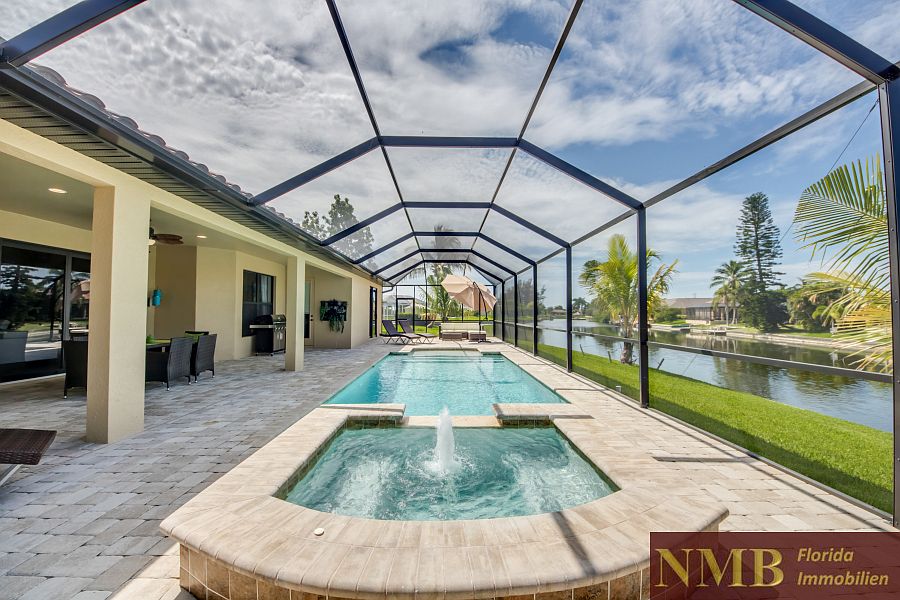 The supply of properties in the upper market segment in good locations in Cape Coral with boat access to the Gulf of Mexico has declined rapidly and the construction of a new home in Cape Coral, Florida is once again becoming the focus of investors.

The desire to find a bargain is growing, especially among Europeans and particularly among the Swiss due to a favorable exchange rate. Today, off-water homes are offered for $240,000 in Cape Coral, for which the current owner once had to pay $400,000 and more. In 2009, the following sentence stood at this point on our website:

In 5 years, you will look at the price index with the usual remarks: 'If only we'd bought', but with "if" or "should have" nobody has become rich - ever.

Today we can say that our statement at that time has become reality. While a few years ago the exchange rate was still very favorable for the European buyer ($1.40 - $1.50 for a EURO), this additional cherry on top is melting away when buying U.S. real estate today. Currently (December 2019) the exchange rate is $1.11 for one EURO. In January 2017 it was even as low as $1.05. Renowned investment bankers even forecast the dollar/euro parity in the foreseeable future. Goldmann Sachs went far out on a limb by forecasting $0.85 for 1 Euro - a more than unlikely scenario. Should parity nevertheless occur in the foreseeable future, the Europeans will have to pay considerably more due to the unfavorable exchange rate, even if the property price would remain the same (which is not to be expected).

The exchange rate forecasts for the coming years range between $1.16 and $1.25, with the upper forecast limit already tested in January 2018. The raised interest rates by the Federal Reserve were only very moderate and had hardly any serious long-term effect on the $/€ exchange rate. In the meantime, the FED's interest rates have been lowered again.

In March 2010, we already emphatically pointed out the expected price increase and exchange rate development in our BLOG (http://www.nmb-florida-realty.com/blog/2010/05/immobilienmarkt-cape-coral-florida-marz-2010/). In 2012, too, the risk of rising prices and the devaluation risk of the EURO was again highlighted (http://www.nmb-florida-realty.com/blog/2012/03/immobilienkauf-cape-coral-preise-steigen-im-februar-2012-weiter/). Both forecasts have now come true and the dollar became even stronger than expected. Since February 2017, the appreciation trend of the dollar seems to have come to an end and a turnaround has been initiated, which will only continue as long as the Euro crisis does not break out again. The biggest risk factor here is the EU's third-largest economy: Italy.

When is the right time to buy a property in Florida?

Despite the still moderate level of property prices in Cape Coral, however, it is often not easy to determine whether the dream property is really a bargain or not. On closer inspection, so-called "short sale" properties usually represent a pricing that lack any market reality. A non-professional can hardly assess the situation without the help of a professional. Therefore, a prospective buyer should always seek the advice of an experienced broker (Realtor®) when buying a property in Florida. Please read our information on the U.S. brokerage system.

You can undoubtedly make a real estate bargain in Cape Coral, Florida, if you know the real estate market exactly and follow the rules of the game. During the real estate crisis, a huge number of houses were foreclosed by the banks and listed for sale at a low price as so-called "bank owned properties" (REO). However, the boom in short sales, foreclosures and bank owned properties is now over. Banks have largely reduced their non-performing portfolios.

If such a real estate purchase is planned in Cape Coral, one should be familiar with terms such as Lis Pendens, Foreclosure, Short Sale, Deficiency Judgment, Auction, REO. At first everything sounds very complex, but with the right partner it is not that complicated, as the purchase of real estate in Cape Coral, Florida, as everywhere in the U.S. is clearly regulated. As a licensed Florida real estate agent, a REALTOR®, we organize and arrange for you all inspections, appraisals, deadlines, tax and financing issues necessary for a real estate purchase or new construction in Florida, without burdening you with these issues. We are on site for you.

If you want to be on the safe side, you buy a house that is still inhabited, carefully maintained by its owners and in top condition and in a top location - even if at first glance it does not seem to be a "real estate bargain". In the medium and long term, however, these properties usually turn out to be the real bargains with above-average price increases only due to the price increase of the property in a top location.

What must be considered with supposed "bargains" in Cape Coral?

Bank owned properties are usually in a more or less desolate condition if they have been vacant for some time. To save costs, the banks leave the properties to themselves. Usually the outside facilities are in a bad condition, the palms have dead fronds, the once well-kept lawn is a picture of misery, the pool water has turned green, the air conditioners have been out of operation for weeks or months. This means that follow-up costs can amount to several tens of thousands of dollars. Also, we are here to help connect you with professional companies in our network and organize all necessary formalities of a real estate purchase or a renovation of your property.

Tip:
If you are going on a short sale or foreclosure bargain, you need to be very fast, i.e. either cash or a secured financing (bank approval) for buying a house in Florida. If you choose this path for your Florida property purchase, you should only go through it with very experienced brokers who have good relationships with the loss mitigation departments of banks and financial institutions - talk to us.